The National Maintenance Agreements Policy Committee, Inc. (NMAPC) is pleased to congratulate ArcelorMittal, one of the largest steel producers in the United States, for recently completing a crucial $24.4 million infrastructure project at its Burns Harbor, Indiana facility.

The project was completed under the terms of the National Maintenance Agreements (NMA), one of the most widely used project labor agreements in the industrial construction and maintenance sector. It is administered by the NMAPC, a 28-member deliberative body made up of an equal number of representatives from labor (14 international building trades unions) and management (union contractor firms). 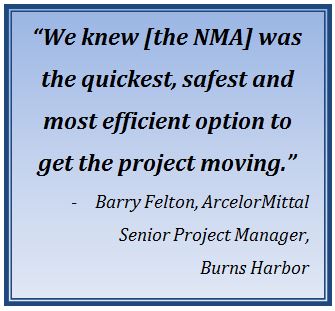 Billions of dollars of industrial maintenance and construction work is completed under the NMA each year because it offers a straightforward set of uniform terms and conditions, a great deal of scheduling flexibility and a built-in "rapid response" dispute resolution process via the NMAPC. These and other benefits have prompted a rapidly growing number of clients to use the NMA for all qualified industrial work at particular locations known as "Yellow Card" sites. These exclusive arrangements ensure that the work will be completed by union labor, creating significant economic benefits for local communities.

ArcelorMittal's Burns Harbor is one such Yellow Card site, so when a piece of machinery known as a stacker reclaimer unexpectedly failed, executives contacted the NMA and went to work. "The stacker reclaimer is a vital part of our operations, and it had to be replaced as quickly as possible," said Barry Felton, Senior Project Manager at Burns Harbor. "Based on our successful past experiences with using the NMA, we knew it was the quickest, safest and most efficient option to get the project moving."

The massive stacker reclaimer, which stands 150 feet tall and is more than 400 feet long, is used to supply raw material to Burns Harbors' large blast furnaces. The machine moves (or reclaims) material from a stockpile and then sorts (or stacks) it in the proper location. 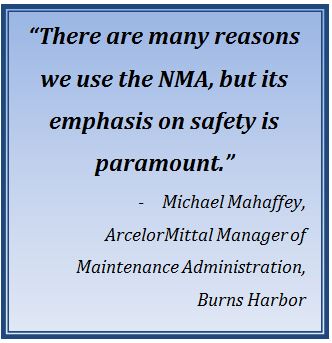 Nearly a dozen union contractors and seven building trades unions worked on the project. The first phase involved demolishing and removing the failed stacker reclaimer and repairing the remaining infrastructure. Then the new, state-of-the-art, 1,700-ton machine had to be unloaded from an ocean-going vessel, transported to the site, erected and installed. To make things even more interesting, all of this took place between October 2015 and March 2016, the coldest months of the year - especially on the shore of Lake Michigan, where Burns Harbor is located. "There were many extremely heavy, high-risk lifts and critical work performed under very adverse weather conditions," Felton noted.

Despite these challenges, the entire project - which consumed more than 57,000 work hours - was completed on time and, more importantly, with zero recordable injuries.

"There are many reasons we use the NMA, but its emphasis on safety is paramount," added Michael Mahaffey, Manager of Maintenance Administration at Burns Harbor. "Pre-job conferences are mandatory, and the entire Agreement is geared toward making sure that everyone - contractors, unions and the owner - communicates and works together. The NMA allows people to perform at their best and become a part of a cohesive team."

"ArcelorMittal is a valued NMA user, and the success of this project is extremely gratifying," said Steve Lindauer, NMAPC Impartial Secretary and CEO. "Every contractor and union craftworker who worked on this job should be proud of themselves. They demonstrated what can be done when everyone is committed to the same goal. It's also a perfect example of why the NMA was created in the first place: to give owner-clients a resource for ensuring that critical, time-sensitive projects are completed safely and efficiently, all while observing the highest standards of quality and professionalism."